What is Morbihan disease?

Morbihan disease was first described in 1957 by French dermatologist Robert Degos, and is characterised by a firm oedema on the upper portion of the face. Although generally considered as a refractory and chronic form of rosacea, Morbihan disease may exist in the absence of other features of rosacea, and thus may represent a separate disease process. 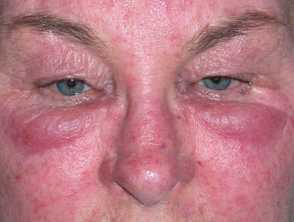 Violaceous swelling of the lower lids in Morbihan disease 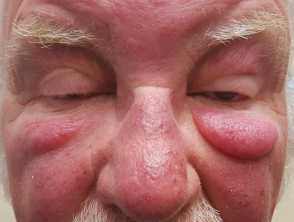 Who gets Morbihan disease?

Morbihan disease usually affects Caucasians in the third and fourth decade of life.

There are only two reports of the disease in skin of colour [1]. It is more common in women than men.

The lymphoedema of Morbihan disease follows the loss of lymphatic vessel wall integrity and the passing of fluid through the vessel. [2,3] The cause is unknown, but possible causes have been speculated, such as:

What are the clinical features of Morbihan disease?

Morbihan disease is characterised by erythema and solid, non-pitting oedema.

What are the complications of Morbihan disease?

How is Morbihan disease diagnosed?

There are no biochemical or histopathological findings specific to Morbihan disease.

Biopsy should be conducted to rule out other diagnoses. Nonspecific histopathology findings include:

What is the differential diagnosis for Morbihan disease?

Differential diagnosis for Morbihan disease includes other granulomatous and inflammatory facial conditions [7,8]. Conditions to consider include:

What is the treatment for Morbihan disease?

The antibiotic metronidazole and the tetracyclines, minocycline and doxycycline, are effective for inflammatory rosacea. Other options are:

Thalidomide, clofazimine and systemic corticosteroids, such as prednisone, are typically ineffective.

Surgical excision of redundant oedematous tissue may be required for a full recovery. Other options are:

Facial massage can be used to improve lymphatic drainage. Contact irritants or allergens should be avoided to aid recovery.