What is a spondyloarthropathy?

Spondyloarthropathy refers to a group of five seronegative inflammatory rheumatic disorders that are related in disease manifestation and genetic susceptibility [1]. The spondyloarthropathies include:

Spondyloarthropathies that are less frequently associated with HLA-B27 are psoriatic arthritis and reactive arthritis, the prevalence of which is around 2% in the general population [2].

The exact aetiology and pathogenesis of the spondyloarthropathies is undetermined. There is clear evidence that genetic background and environmental factors trigger proinflammatory cytokines, and these lead to an increased susceptibility to spondyloarthropathies [2]. There is a close link between ankylosing spondylitis, psoriasis, and Crohn disease. This link suggests that the pathogenesis of ankylosing spondylitis involves an immune reaction within the gut or the skin that may be influenced by microbial responses [3].

What are the clinical features of spondyloarthropathy?

Patients generally complain of inflammatory back pain in the spine or sacroiliac joints (which connect the spine, hips, and sacrum).
The onset of back pain is usually before the age of 45 years [2].
Peripheral arthritis can affect small and large joints in an asymmetrical pattern.
Patients may also present with:

What are the skin conditions associated with spondyloarthropathy?

Psoriasis in a patient with ankylosing spondylitis 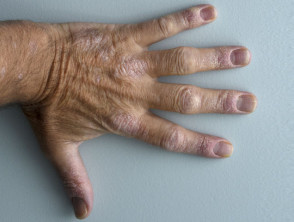 Psoriasis on the dorsal hand 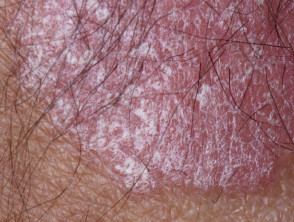 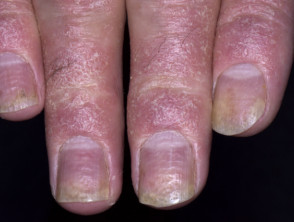 Enteropathic arthritis can present with:

Mucocutaneous manifestations for reactive arthritis (associated with chlamydia infection) include:

What are the complications of spondyloarthropathy?

How is spondyloarthropathy diagnosed?

Spondyloarthropathies are diagnosed according to the Assessment of Spondyloarthritis International Society (ASAS) classification criteria [8]. These criteria only apply to patients aged under 40 years old or those with inflammatory back pain for over 3 months. The criteria include imaging, HLA-B27 status, and the features of spondyloarthropathy.

Imaging typically includes plain radiographs and magnetic resonance imaging. Sacroiliitis (inflammation of the lower spine) on plain radiography is specific for spondyloarthropathies. It may take several years before sacroiliitis is visible on imaging.

Laboratory evaluations should include a full blood count, a complete metabolic panel, and erythrocyte sedimentation rate (ESR) or C-reactive protein (CRP). The ESR and CRP are elevated in about 50% of patients with spondyloarthropathy. Elevated CRP is a good predictor of radiographic progression and better response to tumour necrosis factor (TNF) inhibitors [2].

What is the differential diagnosis for spondyloarthropathy?

The differential diagnoses for spondyloarthropathies is based on the distribution of the affected joints.

Differential diagnoses to consider include:

Differential diagnoses to consider include:

What is the treatment for spondyloarthropathy?

The goal of treatment for spondyloarthropathies is to improve function, decrease pain, and reduce the risk of complications. Management should include lifestyle interventions, including an exercise program to maintain posture, strength, and range of movement. Patients should also be monitored for osteoporosis and encouraged to cease smoking.

Non-steroidal anti-inflammatory drugs (NSAIDs) are considered to be the first-line treatment for axial ankylosing spondylitis. They are quite effective, reducing pain, tenderness, and stiffness in 80% of patients. Patients who do not respond to NSAIDs may benefit from anti-TNF-alpha therapy, such as infliximab, etanercept, or adalimumab. These can reduce the spinal and peripheral joint inflammation of ankylosing spondylitis and control extra-articular symptoms.

What is the outcome for spondyloarthropathy?

The progression of ankylosing spondylitis is highly variable. It may result in the fusion of sacroiliac joints and the vertebral column, also known as a ‘bamboo spine’. Patients who have frequent episodes of iritis, hip involvement at presentation, peripheral joint involvement, and high inflammatory markers at baseline tend to have a poorer prognosis [10].

At least 20% of patients with psoriatic arthritis will develop severe and disabling disease. Up to 7% of these patients may require joint surgery, with the most common being hip arthroplasty [11].

Approximately 50% of patients with reactive arthritis can expect symptoms to resolve in the first 6 months; however, 30–50% will develop chronic arthritis [12].