What is chilblain lupus erythematosus?

The term ‘chilblain’ is derived from Anglo-Saxon terms ‘chill’ referring to ‘cold’ and ‘blegen’, which is a synonym for ‘sore’. 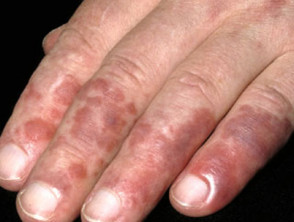 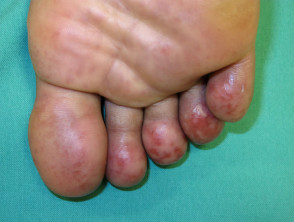 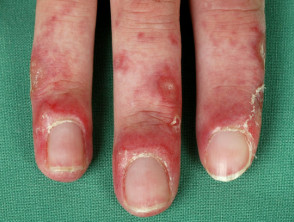 Who gets chilblain lupus erythematosus?

Chilblain LE is an under-reported entity. In a 2008 review, the authors stated that 70 cases have been reported in the literature. It mainly occurs in adults but can occur at any age [2].

Chilblain LE occurs as both a sporadic and inherited condition. Sporadic cases are the most common and occur predominantly in middle-aged women [3], while familial chilblain LE presents in early childhood [4].

Associations between chilblain LE and anorexia nervosa, intestinal lymphoma, and pregnancy have been described in the literature.

The pathogenesis of the sporadic form of chilblain LE remains unknown [2].

It is believed a cold stimulus provokes vasoconstriction or microvascular injury with occlusion of the capillary bed and diminished circulation, leading to hyperviscosity and stasis of the skin, which is exacerbated by reduced blood temperature [2,3].

These pathophysiological changes in the flow and microvasculature may be aggravated by immunological anomalies (eg, rheumatoid factor or autoantibodies).

In those with a family history or onset of chilblain LE in childhood, the condition may be a result of a mutation in the TREX1 or SAMHD1 genes [5].

These mutations in TREX1 and SAMHD1 are inherited in an autosomal-dominant manner [4,6]. Heterozygous mutation (mutation of one allele) in these genes lead to the accumulation of nucleic acids (eg, double-stranded DNA, RNA–DNA duplexes).

TREX1 mutations have also been described in other conditions related to microvascular endothelial dysfunction, such as dominant retinal vasculopathy and cerebral leukodystrophy.

What are the clinical features of chilblain lupus erythematosus?

Chilblain LE begins as red or dusky purple patches, papules, and plaques that are initiated or exacerbated by exposure to cold and moisture in a cool climate. The lesions are often pruritic and painful.

The common sites involved are the fingers, toes, heels, and soles of the feet. Less frequently, the lesions may be present on the nose, ears, palms, knuckles, elbows, knees, and lower legs.

Other features may include:

People living in regions with warmer and drier climates may not develop typical chilblains.

In some circumstances, chilblains may represent lupus pernio with pre-existing LE rather than as chilblain LE [7]. Although the two entities are clinically similar and both are associated with systemic disease (sarcoidosis and systemic lupus erythematosus, respectively), the prognosis and treatment regimens are distinct [7].

What are the complications of chilblain lupus erythematosus?

Complications of chilblain LE include:

Follow-up is advised for those with features of SLE (eg, malar rash).

How is chilblain lupus erythematosus diagnosed?

The major criteria for chilblain LE are:

The minor criteria for chilblain LE are:

Chilblain LE is often associated with several immunological makers including:

What is the differential diagnosis for chilblain lupus erythematosus?

Perniosis (or usual chilblains) is characterised by:

Acrocyanosis is characterised by:

Raynaud phenomenon is characterised by:

Livedo reticularis is characterised by:

Dermatomyositis can cause nail fold erythema, telangiectasia, and nailfold inflammation similar to chilblain LE. Other clinical features of dermatomyositis include:

Cold panniculitis is characterised by:

Cold urticaria is a form of chronic inducible urticaria characterised by:

What is the treatment for chilblain lupus erythematosus?

Protection from the cold should be emphasised and may include:

Smoking cessation should also be encouraged, due to the vasoconstrictive effects of nicotine.

Medication may be necessary for patients with recalcitrant lesions and for secondary bacterial skin infections. A therapeutic approach has been proposed based on the level of evidence of the therapies in chilblain LE [2].

Medicines used include the following:

Patients with chilblain LE have successfully been treated in certain circumstances by excision and repair using a full-thickness graft derived from an unaffected area.

What is the outcome for chilblain lupus erythematosus?

The majority of patients respond well to symptomatic treatment.

In those with the sporadic form of chilblain LE, 18% of individuals will eventually develop SLE; there is no evidence of progression to SLE in cases of familial chilblain LE.