The information below is from an introductory course on dermatopathology intended for medical students and registrars/residents [1].

The haematoxylin and eosin (H&E) stain 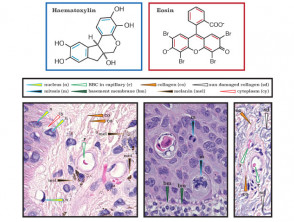 The illustrations of normal skin in the figure below show comparatively thin skin from the wrist (bottom) and thicker skin from the bottom of the foot (left, an acral site). Note, only acral sites have a stratum lucidum (a clear layer of dead skin cells). Fine, spiny intercellular desmosomes in the stratum spinosum are also visible. Within the epidermis, non-keratinocytes have comparatively hyperchromatic nuclei. 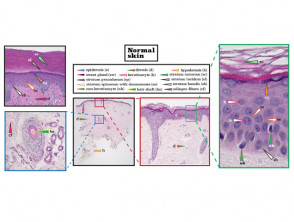 Seborrhoeic keratoses are well-demarcated proliferations of monotonous, sometimes cuboidal, epidermal keratinocytes. They are characterised by keratin-filled 'horn' cysts within the epidermis. 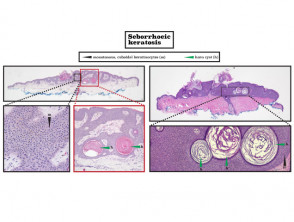 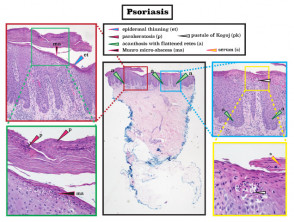 Lichen planus classically exhibits a lichenoid inflammatory pattern (often described as a 'sawtooth' appearance) in which there are prominent mononuclear cells at the dermal–epidermal junction that cause damage. Basal keratinocytes may show vascular degeneration due to immune-mediated apoptosis. Other features are hypergranulosis (thickening of stratum granulosum), acanthosis, epidermal thinning, pigment incontinence (pigment within melanophages in the upper dermis), and spongiosis (oedema within the epidermis). (See DermNet's page on Lichen planus pathology.) 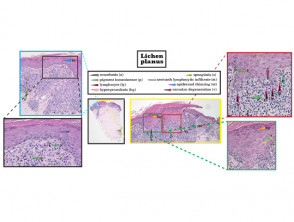 There are several subtypes of basal cell carcinoma (BCC) in which there is a peripheral palisade of basal keratinocytes with hyperchromatic nuclei. In the figure below, the left lesion is a superficial BCC, and the right one is an infiltrative BCC. Following histological slide processing, retraction artefacts results in clefts. (See DermNet's page on Basal cell carcinoma pathology.) 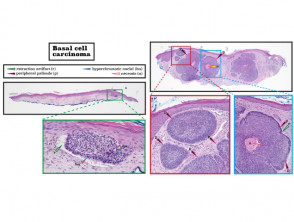 Dermatitis herpetiformis is a blistering disorder characterised by neutrophils at the tips of dermal papillae and subepidermal vesicles filled with neutrophils. Eosinophils, spongiosis, and perivascular inflammation are also typical. In this disorder, direct immunofluorescence reveals granular immunoglobulin (Ig)A in the papillary dermis. (See DermNet's page on Dermatitis herpetiformis pathology.) 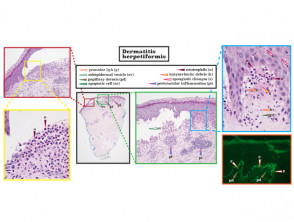 The pathological findings in drug eruptions are diverse and include many of the features seen in other types of lesions, including spongiosis, interface activity, and variable lichenoid inflammation. 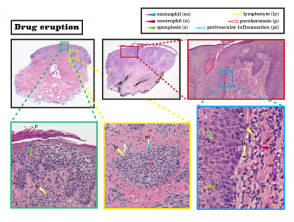 Mycosis fungoides is a type of T-cell lymphoma characterised by epidermal T-lymphocytes with hyperchromatic nuclei that may form pathognomonic and Pautrier micro-abscesses. Other features seen in mycosis fungoides are perivascular lymphocytes, spongiosis, and surface serum crust. (See DermNet's page on Mycosis fungoides pathology.) 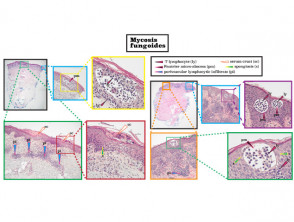 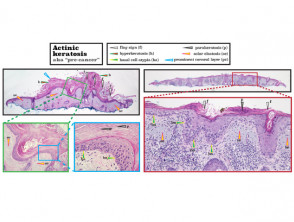 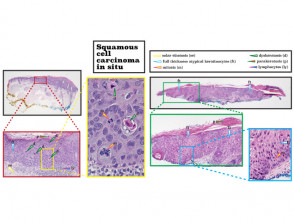 Cutaneous SCC results in dyskeratosis and invades beyond the basement membrane into the dermis. Cellular atypia may be described as glassy. Other features seen in cutaneous SCC include ulceration (serum crust) and keratin pearls. (See DermNet's page on Squamous cell carcinoma pathology.) 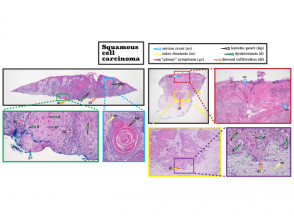 Naevi with varying levels of atypical features may be called atypical or dysplastic due to architectural asymmetry, bridging of rete, wider junctional than dermal components, cellular atypia, fibroplasia, and lymphocytic infiltration. The images are from an acral site, showing a thick stratum corneum. (See DermNet's pages on Melanocytic naevus pathology and Blue naevus pathology.) 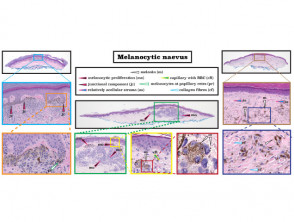 Melanoma is a malignant proliferation of atypical melanocytes. Histological features include a dusky cytoplasm, pagetoid scatter (abnormal cells within the higher levels of the epidermis), and irregular cellular nests. Melanoma in situ is confined to the epidermis whereas invasive melanoma extends past the basement membrane into the dermis. Reactive, perilesional lymphocytic inflammation is common. (See DermNet's page on Melanoma pathology.) 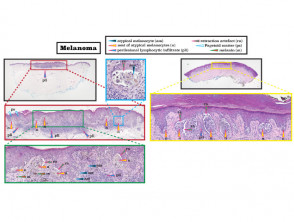 The classical histology of molluscum contagiosum is epidermal hyperplasia, with a crater containing molluscum bodies (Henderson–Patterson bodies). These are large keratinocytes with eosinophilic intracytoplasmic inclusions that push aside the nucleus. (See DermNet's page on Molluscum contagiosum pathology.) 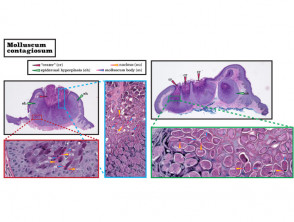 Two distinct subtypes of viral warts are shown in the figure below: verruca vulgaris (the common wart, left) and verruca plana (the flat wart, right). Verruca vulgaris is characterised by hyperkeratosis, hypergranulosis, parakeratosis, blood in the stratum corneum, and prominent acanthosis. The rete ridges point inwards. Large warts are highly vascularised with enlarged capillaries in the periphery and dermal papilla. Verruca plana are flat warts that lack hypertrophic features. Typically, there are koilocytes with a perinuclear halo in the upper epidermis. (See the DermNet pages on Verruca vulgaris pathology and Verruca plana pathology.) 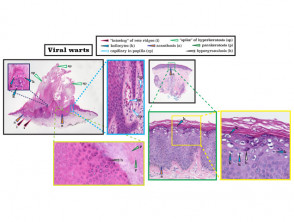 Herpes simplex infection results in widespread keratinocyte necrosis and balloon cells with the '3 M’s' — multinucleation, moulding of nuclei (closely juxtaposed nuclei that conform to each other’s shape), and margination of chromatin. (See the DermNet page on Herpes virus infection pathology.) 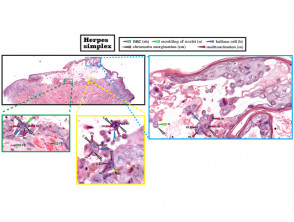 Bullous pemphigoid is recognised by a subepidermal split, which generates tense bullae as seen in the figure below (the left image). The right-sided images in the figure show pre-cleft formation with a brisk eosinophilic infiltrate. Direct immunofluorescence shows the deposition of IgG or C3 along the basement membrane. (See DermNet's page on Bullous pemphigoid pathology.) 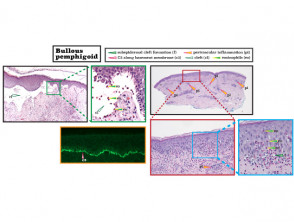 Pemphigus vulgaris is a blistering disease in which there is acantholysis of keratinocytes above the basal layer of the epidermis (referred to as the 'tombstone' pattern). There is usually a superficial perivascular inflammatory infiltrate. Direct immunofluorescence shows the deposition of IgG between the epidermal keratinocytes creating a fishnet pattern. (See DermNet's page on Pemphigus vulgaris pathology.) 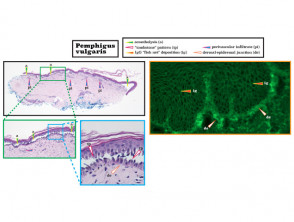