What is cutaneous squamous cell carcinoma?

Cutaneous SCC is invasive into the dermis and may rarely metastasise (spread to other parts of the body). The more superficial forms of cutaneous SCC confined within the epidermis are known as intraepidermal SCC or SCC in situ. 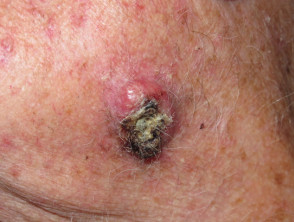 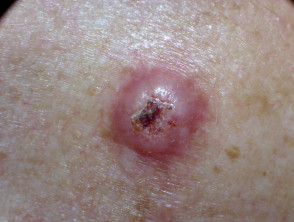 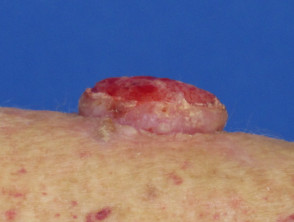 What is skin of colour?

‘Skin of colour’ is a subjective term referring to a natural skin that is ‘darker’ than white (ie, brown or black skin). When compared against a graded assessment of skin colour types, such as the Fitzpatrick phototypes, skin of colour may refer to skin classified as type IV or higher [1]. In some contexts, skin of colour is also used to describe the skin type of different non-white ethnic groups, including those of African, Asian, South American, Pacific Island, Maori, Middle Eastern, and Hispanic descent [2]. See ethnic dermatology.

Who gets cutaneous squamous cell carcinoma?

Cutaneous SCC is among the most commonly diagnosed cancers worldwide [3].

When compared to skin of colour, the cutaneous SCC incidence rates in white-skinned people show a significantly stronger correlation with geographic location [8]. For instance, Australia and New Zealand, which share a similar latitude, have the highest reported incidence of cutaneous SCC in the world, with reports of 228–1332 and 124–598 cases per 100,000 for Australia and New Zealand, respectively, in the mid-1990s [3,8]. In comparison, incidence rates in Europe were 9–28.9 per 100,000 in the population [3,8].

The global incidence rates of cutaneous SCC are increasing, especially in white-skinned people [8,9]. Over the last few decades, it has been estimated the cutaneous SCC incidence rate has doubled or tripled across the United States, Australia and Europe [9]. This trend is thought to be related to changes in popular recreational activities and clothing styles, resulting in increased cumulative sun exposure. The majority (~80%) of diagnoses occur in men and women over 60 years of age regardless of skin colour [8]. Men are much more likely than women to develop cutaneous SCC — at double the incidence in some locations [8,9].

Cutaneous SCC is more common in individuals with [10]:

Exposure to ultraviolet (UV) B radiation is a significant risk factor for cutaneous SCC in Caucasians; in skin of colour, scarring may be more significant [3]. There is a 20–40% risk of cutaneous SCC in chronically inflamed, ulcerated, or scarred skin leading to metastasis, compared with a 1–4% risk in sun-damaged skin [3].

Cutaneous SCC is triggered by an abnormal genetic transformation.

More about mutations to DNA

In white skin, oncogenetic transformation is related to sun exposure, with UVA and UVB radiation damaging and mutating the DNA of these cells [9]. For instance, cutaneous SCC cells have frequently demonstrated mutations to the p53 tumour suppressor gene — a gene that normally functions to repair damaged DNA and prevent the development of tumours [8]. Mutations to this gene may alter its function as p53 mutations are frequently found in many other types of malignancies [8,9]. Similarly, UV exposure can mutate signalling pathways that regulate cell activity, such as the epidermal growth factor receptor (EGFR), RAS, Fyn, or p16INK4a pathways. UV radiation may also suppress the ability of the immune system to detect to destroy tumour cells. More significant immunosuppression, such as in transplant patients, may allow infection by the human papillomavirus strains implicated in causing cutaneous SCC development [8].

In darker skin, a higher content of UV radiation-absorbing melanin is thought to protect the DNA from mutation and damage.

However, cutaneous SCCs may also arise in areas not exposed to sunlight or outside the skin. As the rates of these cutaneous SCCs can be higher in non-white-skinned ethic groups or display a hereditary pattern, it is thought genetic processes outside of skin pigmentation influence cutaneous SCC development [9]. For instance, even in individuals with the same skin type, variants of the melanocortin one receptor (MC1R) gene are believed to increase the risk of cutaneous SCC [9].

What are the clinical features of cutaneous squamous cell carcinoma?

Cutaneous SCC can occur anywhere on the skin. In white-skinned people, this is typically in areas frequently exposed to the sun [3]. It is estimated that 60–65% of cutaneous SCCs initially arise from actinic keratosis. Others may arise from intraepidermal carcinoma. In skin of colour, cutaneous SCC more frequently develops in non-sun-exposed areas, such as the legs and feet or in the anogenital region [3].

Subtypes of cutaneous SCC include [10]:

Cutaneous SCCs can be classified as low or high risk; high-risk features of cutaneous SCC regardless of skin colour include [10]:

In skin of colour, cutaneous SCC arising from the perianal region or scarred skin is high risk due to relatively high metastasis rates [3].

Clinicians or pathologists may also define risk by the subtype of SCC. Currently, there are no definitive ranking systems used to classify cutaneous SCCs, although the following system has been proposed [11]:

Cutaneous SCC is usually suspected during a physical examination, often with the aid of a dermatoscope. In skin of colour, special attention may need to be given to areas not typically exposed to the sun and scarred or inflamed skin [3].

In patients with high-risk cutaneous SCC, it may be important to determine the depth of tumour invasion and the spread to surrounding tissue (disease staging). The seventh edition of the American Joint Committee on Cancer (AJCC) staging system for cutaneous SCC is commonly used [12].

The AJCC tumour staging for cutaneous SCC is as follows [12]:

The AJCC nodal staging for cutaneous SCC is as follows [12]:

To determine the stage of cutaneous SCC, the following investigations are usually considered in advanced cases:

What is the differential diagnosis for cutaneous squamous cell carcinoma?

The main lesions that are confused with SCC are:

More about the differential diagnosis for cutaneous SCC

Other differential diagnoses for cutaneous SCC include:

Malignant lesions, such as basal cell carcinoma and melanoma, have a peak incidence at the same approximate age (60+ years) as cutaneous SCC, and so are more likely to be present simultaneously.

Cutaneous SCC may occur near or within skin affected by chronic conditions (eg, psoriasis and lichen planus). In these cases, especially where the chronic condition is widespread or poorly controlled, differentiating between lesions can be more difficult.

Compared to white skin, cutaneous SCCs in skin of colour show a more significant association with chronic inflammatory or scarring processes in the skin (Marjolin ulcer) [3].

What is the treatment for cutaneous squamous cell carcinoma?

Surgical excision is the recommended first-line treatment, regardless of skin colour [13]. Recommendations for excision margins are as follows [13]:

Other methods of removal include [13]:

Intraepidermal SCCs may be treated with topical creams (fluorouracil or imiquimod) or cryotherapy if surgical removal is unsuitable [13].

What is the treatment for advanced or metastatic squamous cell carcinoma?

Locally advanced primary, recurrent, or metastatic SCCs require multidisciplinary consultation. A combination of treatments may be used for these aggressive tumours, including:

The 2015 European consensus-based interdisciplinary guidelines for locally advanced or metastatic cutaneous SCCs make the recommendations below [14].

There are no established guidelines for follow-up. Follow-up is generally recommended given that 30–50% of patients with an SCC are likely to develop another within five years [14]. The time between follow-ups is typically based on the risk of new lesions, recurrences, or metastases. For patients with a lower risk, an annual follow-up may be sufficient. Patients with a higher risk (eg, renal transplant patients on immunosuppressant medication) may require more closely spaced follow-ups [14].

In individuals with multiple cutaneous SCCs or individuals at high risk of developing cutaneous SCCs, oral retinoids (ie, acitretin, isotretinoin) may slow tumour growth or the rate of new tumour development [14]. However, these medications often exhibit side effects that, while not fatal, may prove a nuisance in everyday life (ie, dry skin and mucous membranes). They are also contraindicated in pregnancy due to a high risk of teratogenesis (birth deformities).

What is the outcome for cutaneous squamous cell carcinoma in skin of colour?

Cutaneous SCCs > 20 mm in diameter or 2 mm in depth are associated with higher rates of recurrence or mortality. It has been estimated that the 10-year survival rate in patients with cutaneous SCC that has spread to lymph nodes is approximately 20%, and < 10% if distant metastases have occurred [3].

It is currently unknown why people with skin of colour tend to present with more advanced cutaneous SCCs compared to white-skinned individuals. This difference may be due to [3]: