What are Janus kinase inhibitors?

Janus kinase (JAK) inhibitors, also called jakinibs, are small molecules that interrupt the JAK-STAT (Signal Transducer and Activator of Transcription) signalling pathways involved in the pathogenesis of many immune-mediated and/or inflammatory diseases.

What are Janus kinase inhibitors used for?

Janus kinase inhibitors have shown beneficial effects in a variety of immune-mediated conditions affecting the skin, joints, and gastrointestinal tract. JAK inhibitors have also been used successfully in conditions with JAK mutations such as polycythaemia vera, essential thrombocythaemia, and myelofibrosis.

Tofacitinib received FDA approval in the US for the treatment of rheumatoid arthritis in 2012, and in 2017/18 also for psoriatic arthritis and ulcerative colitis.

Ruxolitinib was approved by the TGA in Australia in 2013 for the treatment of myelofibrosis. It also became FDA-approved for the topical treatment of mild to moderate atopic dermatitis (2021), and non-segmental vitiligo in adult and paediatric patients 12 years of age and older (2022).

Baricitinib was TGA-approved in Australia in 2018 for the treatment of rheumatoid arthritis and, in 2021, for moderate to severe atopic dermatitis. Approval for this indication has also been granted by the European Union and Japan. Upadacitinib was approved by Medsafe New Zealand for the treatment of adults and adolescents from the age of 12 years with moderate to severe atopic dermatitis in 2021.

Use of Janus kinase inhibitors in dermatology

Janus kinase inhibitors have been approved for use in or are currently under investigation for the treatment of:

What are the contraindications with Janus kinase inhibitors?

The Janus kinase family consists of four receptor-associated tyrosine kinases — JAK1, JAK2, JAK3, and tyrosine kinase 2 (TYK2). When activated, JAKs phosphorylate cell membrane cytokine receptors and intracytoplasmic STATs, thereby modulating gene transcription in the nucleus. The phosphate is provided by ATP, and each JAK and tyrosine kinase recognises a slightly different ATP-binding pocket. Overexpression of these pathways can result in the development of autoimmune disease and malignancies.

JAK inhibitors (JAKi) can be classified as: 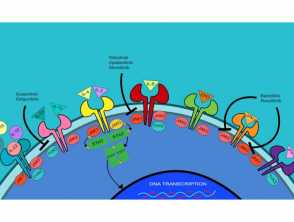 What are the benefits of Janus kinase inhibitors?

As Janus kinase inhibitors are small molecules they can be used topically or orally, unlike biologic agents which require administration by injection. They are also significantly cheaper than biologics as JAK inhibitors are chemically synthesised.

What are the disadvantages of Janus kinase inhibitors?

For a number of dermatological conditions, clinical trials have shown rapid relapse is common after discontinuation of the JAK inhibitor such as alopecia areata, vitiligo, and psoriasis.

What are the side effects and risks of Janus kinase inhibitors?

As Janus kinase inhibitors alter the immune response, they may be associated with increased risk of serious bacterial, fungal, mycobacterial, and viral infections. Tuberculosis screening should therefore be undertaken before starting treatment with a JAK inhibitor. Reactivation of herpes viruses appears to be common, therefore zoster vaccination prior to commencing treatment is recommended.

Common adverse side effects of JAK inhibitors include:

Tofacitinib has been used long-term in patients with rheumatoid arthritis:

In 2021, the FDA issued new updated black box warnings for baricitinib and upadacitinib in line with warnings already in place for tofacitinib. Tofacitinib has been reported to carry increased risks of serious heart-related events, blood clots, and death even at low dose. Although similar adverse events have not yet been reported with baricitinib and upadacitinib, the FDA found the risks have not been adequately evaluated and issued the warning due to the similar mechanisms of action.